Giovanni Boccaccio, also known as Boccaccio da Certaldo, was a celebrated Italian poet, novelist, and scholar. He is principally known for his Decamerone (called the Decameron, in English) which greatly influenced the development of Italian and European literature. He is considered one of the shining lights of the Renaissance. 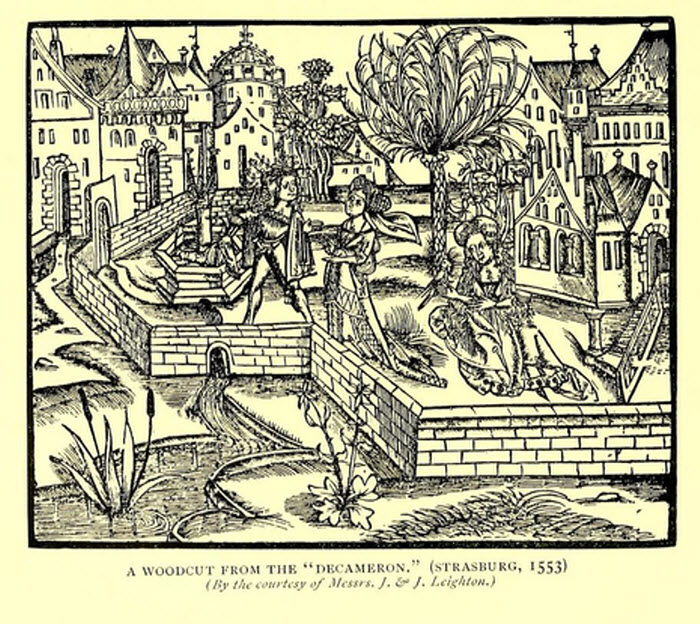 Boccaccio was born in Paris, 1313; the illegitimate son of an Italian merchant and a French mother. His father wished to make a merchant of him, and about 1330 he went as such to Naples, but was disinterested in this trade. Boccaccio himself used to say that he wasted six years as a merchant. Eventually his father permitted him to study canon law, on which he wasted an other six years. Boccaccio's call was to poetry and to learning.

In Naples he felt the full force of two impulses which were to make him famous -- the one, that of admiration for the ancients and longing to know their works; the other, that of imaginative creation. His importance to the world is in these two directions; he was, with Petrarch, a founder of humanistic studies and of modern classical learning; as poet and novelist he was one of the great creative influences of early modern literature.

Before he left Naples Boccaccio had carried far his studies in classical mythology, and he had besides written several works of importance in the Italian language. The immediate occasion for the latter was his passion for Maria, natural daughter of King Robert of Naples (the Fiammetta - "Little Flame" of his works). In her honor he wrote Il Filocolo (wrongly called Filocopo), a prose romance upon the story of Floire and Blanchefleur; also Il Teseide, used by Chaucer for his Knight's Tale and probably the first important poem in ottave rime; II Filostrato, the tale of Troilus and Griseida; II Ninfale Fiesolano. 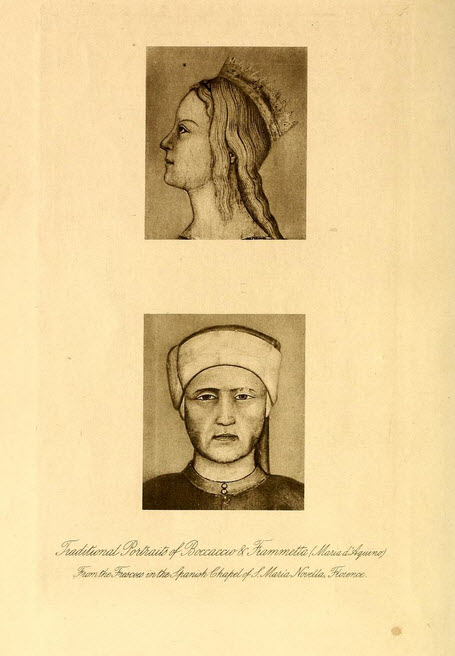 In 1341 Boccaccio left Naples for a time and went to Florence. There, under the melancholy of absence from his mistress, he wrote the Ameto, or in full Il Ninfale d'Ameto, in prose alternating with lyrics; L'Amorosa Visione (The Amorous Vision), a dream in which the poet, led by his lady, sees the lovers and heroes of the past; the Fiammetta, a romance in prose. In 1344 he returned to Naples, and began writing those tales in prose which were afterward put into the mouths of Florentine ladies and gentlemen, and called the Decameron. Most of these were probably written between 1344 and 1350.

In 1340 or 1350 Boccaccio was called back to Florence by the death of his father, and was received with great distinction by the Florentines. In Florence probably, in 1354 or 1355, he wrote his Corbaccio, or Labirinto d'amore (The Labyrinth of Love). The rest of his life, however, was devoted for the most part to classical studies. He eagerly admired Petrarch, and wished to imitate him. He longed to study Greek, and did actually take lessons of a Greek, Leonzio Pilato, who at his request translated Homer into bad Latin, so that Boccaccio probably first of moderns read that poet. He himself toiled laboriously at works of encyclopaedic scholarship: De Genealogia Deorum Libri X V.; De Montium, Silvarum, Lacuum, et Marium nominibus liber: De Casibus Virorum et Feminarum Illustrium libri IX.; and De Claris Mulieribus. These works are now unreadable, but the impulse given by them to European scholarship was very great, and they were much drawn upon (especially the De Casibus) by later writers for their imaginative material.

In 1378 the Florentines appointed Boccaccio to the new chair established by them for the exposition of Dante. He had already written a Life of Dante, and now he prepared a commentary upon a little more than sixteen cantos of the Inferno. In 1374, however, he went to Certaldo, the home of his father’s family, to live, and there he died Dec. 21, 1375. The literature about Boccaccio is very extensive.